A proposal for a textbook to learn Braille, English, and other languages 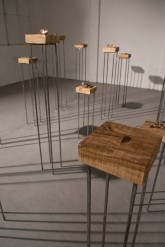 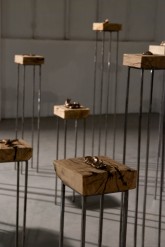 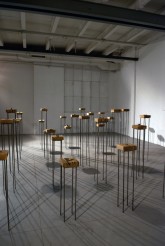 A proposal for a textbook to learn Braille, English, and other languages

When we close our eyes, what do we see?
I asked students whose vision was considered blind or deficient, to sculpt whatever that comes to their minds. With the transformable material; clay in their hands, they formed objects one after another.
The result was a myriad of objects, totally unknown to myself.
About every object, to each student, I asked a simple question—What is this?
And they answered simply.

“A proposal for a textbook to learn Braille, English, and other languages” is an assemblage of internal visions: a modest presentation of the vast field of profundity where language becomes obscure, yet true to its original raison d’être; a means to describe one’s internal vision, and not external images.
My job was to sense each moment of completion and secure the objects from the sculptors. The fragility of the sculptures was not only material.
Images come and go in our minds. Without any hesitation, they would reshape them into something else. The process was a battle where consciousness won over visual reality.
They saw in their minds, I saw with my eyes.
The battlefield was a plain field, where an obscure language ruled.

A PROPOSAL FOR A TEXTBOOK TO LEARN BRAILLE, ENGLISH, AND OTHER LANGUAGES @ FONDERIA ARTISTICA BATTAGLIA

“A proposal for a textbook to learn Braille, English, and other languages” is a series of bronze sculptures casted from clay sculptures made by blind students. Those original clay sculptures were made during pottery workshops arranged by Megumi Matsubara in Morocco and Egypt in 2012. The frst workshop took place on the 15th of June at the Berber Museum of Ourika with eleven blind and visually-impaired children from IDMAJ, as part of the artist’s solo exhibition RÊVEURS RÊVE RÊVES at La Maison de La Photographie de Marrakech. The second workshop was held on the 12th of October at Darb 1718 in Cairo, and included thirteen blind and visually- impaired girls from Al Nour Wal Amal Association during the Artbeat Music, Art and Craft Festival followed by an exhibition of the sculptures.

The original clay sculptures were easily breakable. In 2014, Matsubara casted a selection of them into bronze at Fonderia Artistica Battaglia Milano. The process began with the artist and a team of conservators to restore and reinforce the original objects. Every piece was patiently restored referring to the artist’s memory and her photographs. Some of them could hardly resist the molding process. The most delicate pieces were disintegrated into soil, after the molds were completed. This exhibition is the frst opportunity to showcase the fnished bronze edition, featuring a complete set of thirty sculptures.

Some of them that were too fragile to cast still live in an imagery work created prior to the bronze sculptures with the same title in 2012: a series of coupled images consisting of photographs of the original clay sculptures and texts written in Graphic Braille and English describing the sculptures. An artist book with the same title, edition of fve hundred copies was also printed in March 2013.

This exhibition was realised in collaboration with Fonderia Artistica Battaglia Milano with support of Voice Gallery Marrakech.

Megumi arrived at Battaglia with an enigmatic box full of treasures. She opened slowly all the physical memoirs of the blind children she has been working with, with the care and attention of a creative mother. Every clay piece was carefully restored, moulded and translated into bronze, with the vigilant eye of Megumi that protected every small fingerprint and shade created by the inner landscapes of the children. The process was delicate and revealed in an eternal recognition and dignity of the pieces, through their being transformed into metal, characterised by different temperature and weight, yet maintaining the delicacy of the surface, from what began as a fragmented visual ideal.