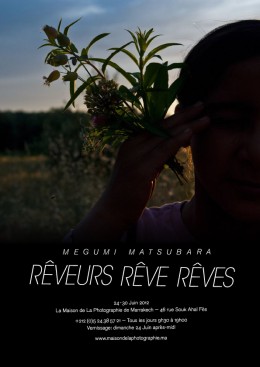 – Did you dream last night?

This is the question that I asked the seven Moroccan children who are blind.
With this question, I was once rejected. With the same question, another time I was given a key to enter their secretive worlds.

They are studying English and computers. I joined their classes to know them. While talking, our eyes never meet. We constantly touch each other to confirm our mutual presence.

In one of the first English classes in my childhood, there was a phrase in a text book, “I touch you. You touch me.” Kids were laughing when they read this text. We don’t have a culture of casually touching each other’s body in Japan. This sounded like a useless phrase to us. But then what is it that tells you something is physically in front of you? While talking to them, I never move my eyes away from their faces. But my eyes begin to see through their physical presence. What am I seeing beyond things that are in front of my eyes?

In Marrakech, there is a belief transmitted over generations that seven guardians have been protecting the city. In both Islam and Christianity, there is a story of seven sleepers who have fallen asleep in a cave for more than 300 years. When they woke, they started telling their dreams. Their stories were treated as predicting the future; here is the ironic paradox of nostalgia for hidden memories.

Dreams only exist in your memory. Therefore, their possession is only limited to yourself. But once you start telling your dreams to others, through this act of storytelling, they begin to exist in someone else’s memory.

I know someone else’s dream because I asked for it.

“My dream is my hope,” one of the children told me. She never saw anything with her eyes. She smiled and said, “I didn’t dream in the night but my dreams are my wishes.”

Where does this will to dream come from?

A boy told me, “I will be crazy if I remember all my dreams!” He said, “I usually get scared when I dream.”

With the first girl I talked to, I was very nervous. She could see a tiny bit and was wearing sunglasses. I could see her big beautiful eyes through the dark glasses. I had a recorder and a camera with me so I told her I had them in front of her. She said it was no problem. I documented our conversation. Later, when we met again, she said her dream became a secret. She told me the reason and I promised to seal her dream forever in my own memory.

She asked me, “Why do you ask about blind people’s dreams? What do you feel when they tell you?” I couldn’t answer this question immediately. I was curious to know how we would try to communicate in a territory where neither of us has visual control. I kept visiting, observing, exchanging conversations, waiting for the moment when suddenly things begin to unfold.

But the more I got to know their dreams, the more I realised the cruelty of my question. Sometimes they went deep down into their memory to tell me something, while at other times they tried to imagine their own dreams. The world I received an invitation to was a special terrain. In the world of dreams shared between us, there was no line I could draw between their sight and my sight, or their dreams and what I imagined from their stories.

To answer the question, I had to imagine their dreams like they imagine what I see. My dreams will begin to weave a pattern interconnected with their dreams. It is a territory where memory and future meet.

And here is what I feel: Rêveurs Rêve Rêves, as an architectural intervention to La Maison de La Photographie de Marrakech.

The exhibition consists of a series of architectural interventions, a proposal for a textbook to learn braille and other languages, an artist book, limited to 500 copies & numbered and 7 kinds of original postcards of morocco 2012 photographed by the artist.