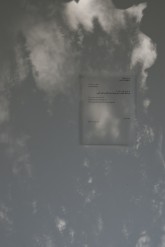 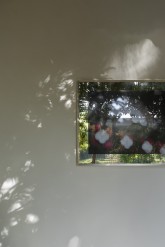 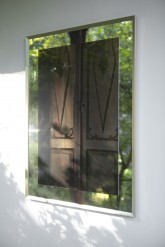 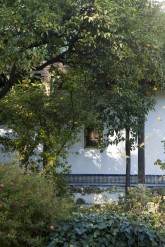 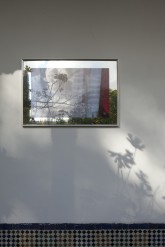 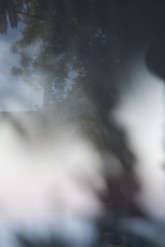 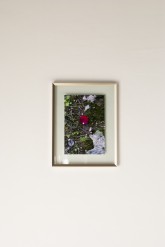 I am in light. I am made of light. The light of others.
I am all the light. I am all these others.
Light; the transparent obstacle that disturbs my sight.
The Queen of all colours.

UNE CHAMBRE ROUGE (A RED BEDROOM) is a work of Megumi Matsubara inspired by and dedicated to Fès Medina in Morocco composed of photography, text and music. The exhibition takes place as part of the 6th Rencontres International de La Photo de Fès.
The project is warmly supported by organizations and individuals stated below and produced with the support of Institut Francais de Maroc.

.
In autumn 2012, Matsubara spent one night in an empty ruined palace where she had a dream of a red bedroom. Searching for the meaning of  the colour in the dream, she asked the blind and visually-impaired students in Fès to describe how they imagined the colour red. In the meanwhile, she stayed overnight in the red salon of Palais Mokri to document the varied states of red in constant change by photography.

The students at the blind school have been on strike to claim their rights during the months that Matsubara was conducting conversations. Based on the theory of Andalusian oud (ancient Arabic instrument) that relates colours to the tones of music, the collected voices and essays about red written in Arabic Braille were translated into the sound of music.

The photography installation at Musée Batha will be accompanied by an oud concert at the blind school – Institut Mohamed 5, as well as an artist talk and sound intervention at Le Cube – independent artspace in Rabat. The project is a reversed sequel to the artist’s solo exhibition RÊVEURS RÊVE RÊVES (DREAMERS DREAM DREAMS) at La Maison de La Photographie de Marrakech in June 2012.