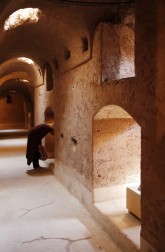 For Marrakech Biennale 6, Megumi Matsubara had chosen Palais El Badii’s underground cave as her site of presentation. She presented multiple works manifested in different media such as bronze, scent, and poetry, then encapsulated all of them with “Toi, un coquelicot— / Un coquelicot, moi aussi.”: 20-min dance performance that took place nine times in total during the opening week of the biennale. During the performance, all the works were fully activated to emit maximum sensorial signals that each work as well as a whole installation had been charged of.

Documentation:
Photos by Jens Martin (except image °15-°24 as a film still)
Film by Fabrice Gino

*
Megumi Matsubara’s multidisciplinary work researches the connections between intellectual perception, physical sensitivity, and the transmission of knowledge through what the artist regards as her main medium: space. Through narratives on presence and absence, the artist challenges traditional notions of mind and body. In the cellars of Palais El Badii, Matsubara presents a project on the subject of consciousness, comprising preexisting works and a newly commissioned performance. The sculptural series A proposal for a textbook to learn Braille, English, and other languages (°1) crystallizes in clay objects made by blind children during a workshop in which Matsubara asked them to sculpt ‘whatever came to mind,’ and functions as a point of departure for Braille drawings intended paradoxically for the sighted. She later cast in these pieces in bronze. La Japonaise (°2) is an olfactory performance where eight scents diffuse to create a ninth perfume that does not exist physically, with the viewer’s body as the medium. This takes place alongside the related textual work Undress (°3). A new performance embraces these elements by creating a dialogue between two bodies, challenging the notions of physical and psychic boundaries.