DOMANI: The Art of Tomorrow 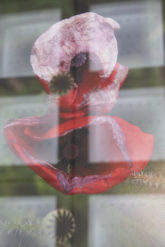 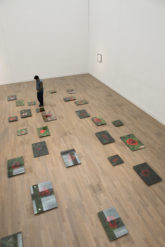 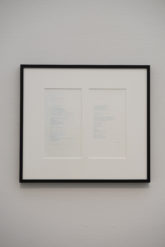 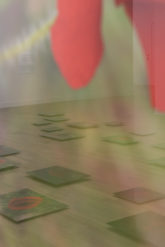 DOMANI: The Art of Tomorrow

Red—
The first color that disappears in the dark.

My first memory. I was two years old. Stretching my hand out the window to reach a flower in the garden, I fell on the ground headfirst.
In a split second, the view switched to outside and I found myself sitting on the same ground as the flower. Shocked, I touched my head. It felt slimy. I looked at my fingers, and saw a stain of red liquid. I had no idea what that red meant nor did I feel any pain. That was how I came to know the color red.

The spring of 2015, Marrakech. I traced the red of the poppy through two approaches.
One was scent. I took a small part from a fairy tale that tells of a drop of someone’s blood that metamorphoses into a red poppy once it touches the floor. I brought it to the botanist Dr. Jalil Belkamel and asked him to blend a scent while imagining a room filled with those red poppies.
Reading the lines of the story, the doctor asked me first:
“Do you want to smell red, or black? The intense red of the poppy is momentary. What ultimately remains at its core is black.”

The other method was photography. Someone told me of a plateau in the outskirts of Marrakech that turns into a red poppy field as vast as the eye can see for one or two weeks every year. I went in search of it.
I found my way to the hill. It was entirely covered by the red, four-petal flowers on that day. The portraits I took of the poppies until the sunset totaled 523. Gradually, their figures disappeared.

Poppy red slowly vaporises in the sun, by the heat.
You will see no body.

While nine out of ten of the participating artists stayed in Europe and North America, Megumi Matsubara is the lone exception, basing herself in Fez, in the North African nation of Morocco. I met her for the first time in the spring of 2018 when she was staying at an artist residency in Paris for a few months. Matsubara’s career has entailed moving across Europe and the Mediterranean region.
I was particularly attracted to her work in this exhibition by suggestive use of the poppy flower and the color red, as Matsubara writes in her essay in this catalogue. While the red flower that inspired her was in the outskirts of Marrakech, poppy itself exists all over the world. Though known usually a hinageshi in Japanese, an alternative name, gubijin-so, is said to be associated with the blood color of Consort Yu (in Japanese, Gu Bijin), the powerful Chinese concubine who committed suicide. Japanese readers are very familiar with the tanka poem about the poppy flower by Akiko Yosano. In the poem, she uses the poppy’s French name, coquelicot, to talk about the burning red color of a poppy field she saw from a train window upon entering France via Siberia in May 1913 to be reunited with her husband, Tekkan Yosano, who lived in France at that time. Sadly, the land covered by coquelicot that Yosano saw became the main battlefield of World War I merely one year later.
In the UK, so-called Remembrance Day or Poppy Day is observed on November 11th, when World War I ended. On this day, it is common to see people wearing individual artificial poppies and artificial poppy wreathes are ceremonially laid at war monuments in towns and cities. Even though Remembrance Day takes place in the autumn, the poppy serves as a symbol of remembrance of soldiers due to its connections to “In Flanders Fields,” the poem written by the Canadian poet John McCrae, who fought in the war. Red poppy was blossoming in Flanders, the border region between France and Belgium and the Western Front of the war where the death toll was especially high, and became a symbol of the fallen soldiers.
Nature, war, and associations of blood are truly universal. The reason I am writing this is because, while preparing for the exhibition, I saw a news story where the leaders of the nations involved in the war gathered at the main battlefield to commemorate 100 years since the end of World War I on November 11th, 2018. And there, I saw wreathes made with artificial poppies.
Matsubara places photographs of poppy, which stimulates these multifaceted memories, on the museum floor. Regardless of the artist’s intentions, it almost seems like the spirit of Roppongi summoned her to do this.
…..

~ Yoko HAYASHI
(Senior Researcher & Curator, Agency for Cultural Affairs)
from « Exhibiting in Roppongi at the End of the Heisei Era »