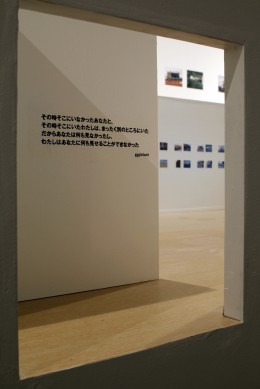 In the 21st century, the relationship between the real world and the digital world saw a great change. The digital world of the past was perhaps viewed as virtual reality, an- other world, outside of the real world. Today, through seamless connections to the world- wide network, the digital world surpasses the space-time continuum, multiplies “here and now”, and is starting to create an augmented realistic world physically and mentally.

The theme of this exhibition is ‘Augmented Reality’. The title of the event is a fusion of two languages. “Wonderland” meaning “illusion”, “fiction”, “mysterious world”; and “virtual world” which is a real world language including elements of the fictive imagination. On the other hand, “一〇一一〇(10110)” is an error code meaning “Data does not exist past this point” and is the language of the digital world. With those languages put together, the title of this exhibit suggests a certain perception of the world where the real world and digital world communicate and create multiple forms of the “here and now” in daily life : the age of augmented reality. Through the radical artworks in this exhibi- tion created by two groups of internationally active young Japanese artists, I hope “Won- derland 一〇一一〇” will appear in front of your eyes. I hope you will discover the possibili- ties, diversity, and fascination of augmented reality through the exhibit.