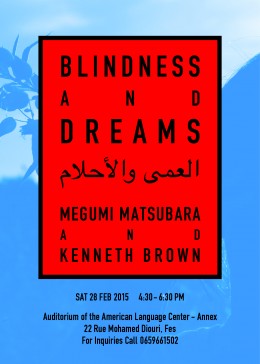 What do you see when you close your eyes? How far can your eyes see? And what about when you dream?
The American Language Center & Arabic Language Institute in Fez is pleased to organize a joint presentation by artist Megumi Matsubara and scholar Kenneth Brown, who will speak about their understanding of blindness and dreams. Sharing the itineraries of their practice and research in Morocco and within Islamic cultures, they will consider the relation between memory and internal vision. Drawing upon poetry, imagery and history, they will also touch upon the worlds of Taha Husayn, Najib Mahfouz, Jorge Luis Borges, Junichiro Tanizaki or Henry Corbin within such themes.

Admission: Free
Language: English (with a summary in Arabic as needed)

MEGUMI MATSUBARA is a Japanese artist whose practice spans from static architecture to ephemeral situations, including installation, sound, photography and text. She reconfigures existing environments and composes spatial narratives to question the balance between presence and absence. Matsubara, originally from Tokyo, studied in Tokyo and London, and has lived and worked between Fès and Tokyo since 2012. In 2015, she opened a year-long solo exhibition in Fès held in multiple places throughout the year.

While she was a student at the University of Tokyo, Matsubara co-established the interdisciplinary architecture firm Assistant with architect Hiroi Ariyama, of which she has been director and founding member since 2002. She is a grant recipient of Agency for Cultural Affairs Japan (2013-2014), Pola Art Foundation (2012-2013), Japan Foundation (2009), Nomura Foundation (2008), among others, for her practices abroad, and two-year winner of the Exploratory IT Human Resources Project Grant: MITOH Program (2002-2004) for her socio-psychological project. Her work in Morocco includes four solo shows in Marrakech and Fès: THE BLIND DREAM (Douiria Mouassine, 2014), WALK STRAIGHT (Voice Gallery, 2014), RÊVEURS RÊVE RÊVES (La Maision de La Photographie de Marrakech, 2012), UNE CHAMBRE ROUGE (Musée Batha, 6th Rencontres Internationales de la Photographie de Fès, 2012), as well as VOID/BETWEEN (Theatre Royale, Marrakech Biennale 4, 2012).

He has carried out extensive research in the Maghreb—in the city of Salé and in the Berber-speaking area of the Souss in Morocco, and in the town of Ksibet El Mediouni in Tunisia, as well as in Israel and the Occupied Palestinian Territories. He is the author of over fifty articles and several books, including “People of Salé: The Social History of a Moroccan City (1830-1930),” Harvard University Press (Cambridge, Mass. 1976; French version, “Les Gens de Salé,” EDDIF, Casablanca 2001), “Journey Through a Labyrinthe: Israel-Palestine,” a photographic essay with Jean Mohr (U. of Penn Press, 1981) and the SHUR Report for the E.U. on human rights in Israel and the OPT (Paris 2008). His latest book, as editor, is “L’Iraq de la crise au chaos: Chroniques d’une invasion,” IBIS (Paris 2004).