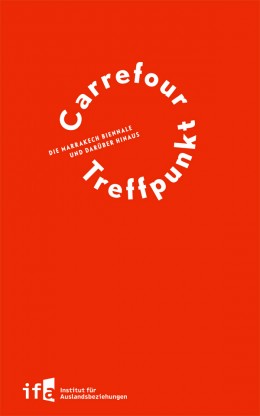 Megumi Matsubara presents a new project for this occasion, and will be attending at the opening and artist talk:

“Où sommes-nous maintenant? Where are we now? Wo stehen wir heute?” was the title of and question raised by the 5th Marrakech Biennale, whose artistic director, Alya Sebti, also devised the exhibition “Carrefour / Meeting Point” for the ifa Galleries Stuttgart and Berlin.

The title of the ifa exhibition sees Marrakech and the bienniale as a metaphorical centre where different paths cross. Marrakech and the biennale were and still are the interface and meeting point between Sub-Saharan Africa and the Maghreb. They form a link to Europe, a turntable between north and south and east and west.

Works from the Marrakech Biennale 2014 and projects that were newly developed for “Carrefour / Meeting Point” look at the permeability between public spaces and private realms. The artists Saâdane Afif, Leila Alaoui, Yassine Balbzioui, Max Boufathal, and Clara Meister explore possible ways addressing our vulnerability and our position in the world – in the form of sculptures, installations, sound and video works. Megumi Matsubara developed a new form of exhibition, having a special perfume created for “Carrefour / Meeting Point” by a Moroccan perfumer. In and with these works, the artists create a further new space for encounter, exchange and collaboration.

With the “Spot on …” series, in recent years the ifa Galleries in Stuttgart and Berlin have presented international biennials supported by ifa (Institut für Auslandsbeziehungen). The aim was to present lesser-known biennials in Germany and also to raise awareness of these international ifa activities.

Saâdane Afif, Leila Alaoui, Megumi Matsubara and Clara Meister present their works; curator Alya Sebti explains the exhibition concept. There will be an opportunity to enjoy an aperitif and talk with the artists and curator. In englischer Sprache / In English